What are Community Partnerships?

Community partnerships bring together people from various organisations. This can be local groups, voluntary organisations, charities, GP practices and local council teams that work together to improve the health and wellbeing of people in their area. Each partnership focuses on a community of between 30,000 and 60,000 people.

Community partnerships are a way of helping to keep people Happy, Healthy, at Home by providing joined up health, care and wellbeing services in their local community through local decision-making and partnership working.

What people told us in The Big Conversation:

In 2017 Healthwatch led a project called The Big Conversation, to find out from local people what mattered most for the future of health and care

What people told us became the foundation of the plan for health and wellbeing in Bradford district and Craven – the Happy, Healthy, at Home strategy

What keeps you Happy, Healthy, at Home?

Healthwatch and the community partnerships now want to continue that conversation with you and want to understand from you what keeps you Happy, Healthy, at Home. To help us with this we need to listen to you and understand:

We will be feeding back your views to health and social care partners so that we can all work together to build a healthier future for the people of Bradford District and Craven.

From October to December 2019 Healthwatch and our community partners went out and about across the district, providing opportunities for you to get involved and tell us what you think. We really wanted to hear from you and were delighted by the response. A final report is now in progress, due for completion by the end of March 2020.

A big THANK YOU to all those of you who took part!

For more information get in touch

You can support our work by printing this flyer and passing it on to people in your local community within Bradford district.

Communities we engaged with from October to December 2019:

Monday 16 December: engagement among the communities of Wharfedale

Tuesday 17 December: Silsden Methodist Church and the community of Skipton

Thursday 19 December: the community of Gargrave and Settle Community Library

Friday 20 December: engagement with the communities of Craven. 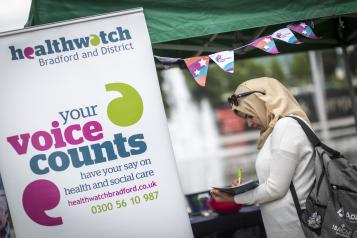 The Big Conversation
During July and August 2017 we spoke to over 900 people about the future of health and care services.
25 November 2017
Report 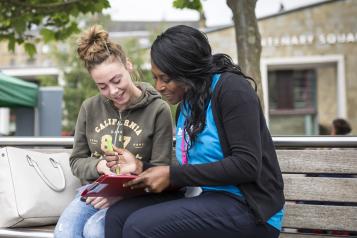